Caring for the Earth

I want to start out by being grateful for the group that I am in, here at the Park Forest Unitarian Universalist Church.  I have been able to inherit the legacy left behind by our late Fenn Taylor of the Care for the Earth Series. I hope to do as well as Fenn did in his time with it.

I would like to go into a topic of global warming, possible corporate ugliness, testifying in Springfield Illinois, dirty coal, asthma, workers losing their jobs. Got an email from Sierra Club telling of a hearing of 5 coal plants being sold to Dynegy Energy corp out of Texas. Dynegy corp would like a 5 year variance on the pollution control investment or they will close down 2 of the plants.  Would I like to come testify or present my point of view in Springfield in front of the Illinois Pollution Control Board? That is like flies on honey for me.

The hearing was Tuesday,  September 17 starting at  9:00 am in the morning. There would be a free bus leaving Chicago at 6 am in the morning and 3 meals will be paid for. Wow!!!!! How can I turn that down? I would have paid to go, but this is just fine also.

Now to get to work on the UUCPF crowd. There were a lot of people that wanted to go, but there were pressing responsibilities pulling them in other directions. But when you get the chance to make an impact on something this big, by all means go for the ride. Of the Unitarians that could pull themselves away, Rich Oram and Andy Stevens made the commitment.

We headed to 70 East Lake Street which is in front of the Sierra Club headquarters in Chicago. I stayed overnight at Rich’s house to take the electric train to millennium station downtown Chicago. On the train at 4:35 am Rich opened Dynegy Corp on Wikipedia to read out loud what they were about. Ken Lay (who is now in jail) helped to start this group awhile back in the 1980’s. There are several names and spin offs all the while till Dynegy is finally arrived at. What we are noticing is, there are a few ceo’s going to jail, holding companies that absorb the debt, other companies that get all the profit. The in-debt company goes bankrupt and poof, the debt is all gone. There are law suits up and down dealing with their business model. This company could be modeled for the bad greedy corporations in a movie.

We get off the train thinking we only have a short time to get to the bus before it leaves. There are about 4 or 5 people there when we arrive and we are fed bagels, donuts and coffee. Turns out we didn’t leave until 7:10 am. Could have had an hour’s more sleep out of this. Chicago to Springfield Illinois would be on the order of 200 miles. Going through Chicago traffic in the beginning and then out into the country we arrived in Springfield sometime after 12:00 pm. Signed into the Illinois EPA building, had a room to put our stuff and into the hearing we went. The place was packed with Ameren employees wearing bright safety vests as their group identity. There were about 40 or 50 Sierra Club people compared to about 100 Ameren employees. From rumors, the employees were paid to be there. One woman overheard in the bathroom, the lady’s supervisor told her she had to be there or she would be fired. She had wanted to stay back for her daughter’s baseball game.

This being my first hearing, it was interesting to watch the different testimonies of the many employees asking for the variance to go through so that they could keep their jobs. There was a break for lunch as we went back to our spacious room. My thought going back in, is this was a real set up by the company to possibly pit environmentalists up against jobs.  Truthfully I’m angry about the workers being pawns in the Dynegy game.   Dynegy from my point of view isn’t any more behind these workers than they need to be. Just don’t cost Dynegy very much money.

Testimony continues with business people getting up and saying that Dynegy is great for their business and how reputable they are. They would all like the variance to be approved. The reason given is that there needs to be certainty in the business market and this variance will give them the business confidence that they need. Many testimonies of just regular life that depends on making a living, community leadership in their towns, boy scouts, girl scouts, softball, baseball, schools etc. I believe this to be true. If the two plants are closed down this will take a big chunk of money out of those communities. Layoffs at schools and other small businesses will have to close up shop. The overall demeanor of the testimony of the pro variance was rather light in intensity.

When the Sierra Club members stepped up to the plate, the tone was a different one.  We came on with passion about our position on the variance. Obviously we are against the variance. Richard came up and brought his Hospice nursing experience of the pain his patients are in when they can’t breathe in the last stages of their life. This would refer to the asthma that people get when in the high pollution zones living down from the power plants. These people die from not being able to breathe at the end of their life, suffering the whole way. Andy Stevens started out with “If I were in a different situation, I would be like you, talking to keep my job.” Referring to the Ameren employees. Andy looked them in the eyes and spoke clearly to them letting them know how he felt. Andy went on to finish the rest of his testimony.

My turn up to bat, I had prepared something the day before on prenatal and childhood development from fossil fuel pollution. After hearing all the different testimonies no one was talking about global warming. Basically I was flying without any notes to refer to. I was short, sweet and to the point. I remember mentioning that we can easily reach 3 degrees C by 2100 from carbon pollution. And yet there was an answer to this dilemma. The world can run on 100% renewable energy. Out of Stanford University, there are several peer-reviewed science papers showing just how to do that. I looked at the Ameren Employees in the room, “We can put all of them to work building the new energy system.”

A lot of the Sierra Club people got up and literally hit the ball out of the park. They were on message, they had intensity, it was a great team effort. The ride home was later than I thought getting in my door at midnight and going to work the next day up at 6:15. I would do it again though. 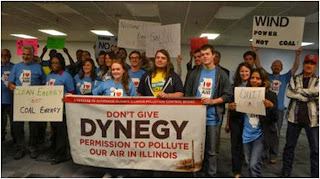 For those of you with internet capability, the Environmental Law and Policy Center has put it succinctly as to Dynegy’s plans. They are claiming hardship as Ameren truly was by having a shell company with no funding that is taking over the five plants. Dynegy themselves are well heeled to do the work of pollution control.